THE STORY OF
BUBBLES BAZUNIEACK 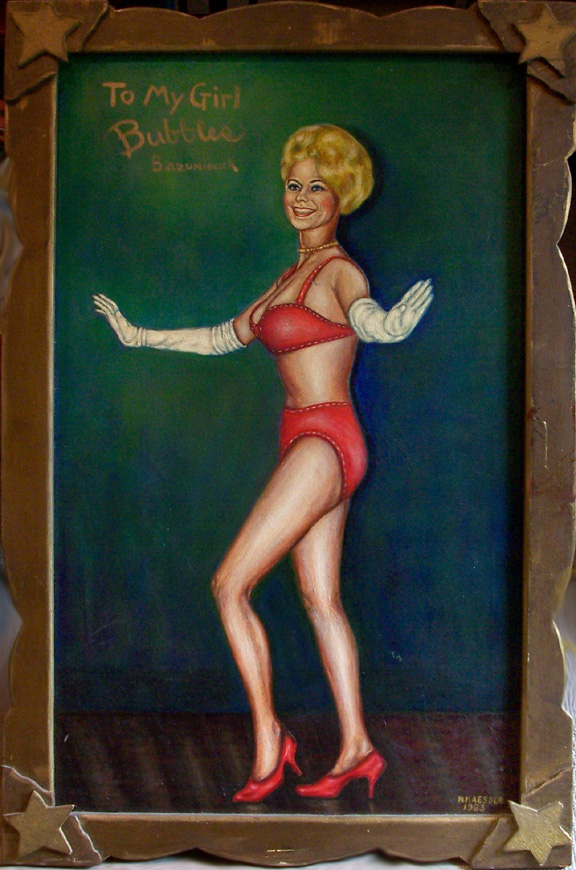 The story of Bubbles Bazunieack is, to say the least, un-confirmed. To this day, I wonder if the whole story was made up. But here it comes:
Karen and I were on our way back from visiting some friends in Syracuse, NY. The weather was bright, cheery and welcoming...a beautiful day.
Not wanting the geographic and psychological constraints of riding the whole way on the restricting Interstate System, we left The New York State Thruway shortly after leaving Syracuse. We were enjoying tremendously the small villages and towns, replete with easy access to quick stops here and there to satisfy every little whim which came our way: Stop for an ice cream, look around the local antique shop, pull over for a historic site...you know the options. Traveling off the highway takes longer, yes. But the trip is far less boring.
As we were cruising through ...Springville, I think it was, just before and south of Buffalo, we came across a yard sale, right there on NY Route 20.
"What the heck", I said, "Let's check it out.".
There were all the items for sale common to yard sales, plus a few I never would have expected. And that is a VERY wrong expectation...one should NEVER be surprised as to what might be found at these folk-culture events.
They had...and I bought...an ultraviolet lamp. It was made in the early 1940's, back when doctors were trying to sell the public on all SORTS of bogus concepts. This device has a multiple-fold arm on it with, under the shade, a glass, tube shaped, sealed vial containing a blob of mercury. The electrical charge passed through the glass tube to "excite" the mercury which gives off a rather substantial dose of UV, the concept being that the lamp could cure ailments such as arthritis and....who-knows-what-all.
So far, I haven't had the need for an arthritis treatment, so I keep it as a curio AND a source of ozone. Some people claim that creating ozone in the home environment makes the air more healthy, which I don't understand because here in Louisville, when the ozone level is up in the middle of summer, they broadcast alerts to that effect...as a pollutant. I dunno.

Anyway, back to Bubbles!
There she was, beaming out to the world in all of her mid-sixties glory...white gloves and all. I asked what was the deal...who was she and why the painting of her?
Tom Irish, the purveyor of all of these yardly goods told me that he found Bubbles at an estate sale.
There were some sons and/or daughters in charge of liquidating their Dad's "stuff" at his trailer estate. (He didn't say if it was a single or double-wide) They seemed to have a negative attitude toward Dearly Departed Dad.
According to Tom, according to THEM, Daddy had a chunk of money at one time. Tom got the impression that they were kinda hoping that whatever Dad had accumulated over the years might help to feather their nests in THEIR later years. But that did not happen.
Dear Dad had lost his lovely wife and in his loneliness, found himself frequenting a "gentleman's club" ...a naughty night spot... a stripper bar.
Well, there happened there a lovely young lady on stage by the innocent name, "Bubbles". She danced and strutted her stuff and, I am sure, accepted tips and such offerings. Dad was bonkers over Bubbles.
He, supposedly, lavished her with many gifts including cars, furs...a house! What she did to warrant these gifts, I never heard stated, but one can imagine everything from very personal and physical favors, all the way to mere companionship... someone with whom to spend some time. Dinner was possibly the most racy event in their relationship.
The moohlah melted away.
The children groaned.

But, still enamored with his dear Bubbles, Dad wanted to find a way to show his love for her. He was an amateur painter. He painted this wonderful portrait and even made the frame himself. He presented the portrait to his Love and seeing the phrase, "To My Girl, Bubbles Bazunieack", she laughed in his face, refused the artistic window to his heart and soul responding, "I am NOT your GIRL!".
Dad was dismayed, to say the least. He had ended up living in a trailer instead of a fine home, because of his love for Bubbles. He wasted away and died a penniless and lonely old man.
The children spoke, according to Tom, in VERY disparaging ways of the old gent.
At least, that is the story I got from Tom. ...at least that is how I am remembering it.
Tom said that he bought the painting for one dollar.
I paid one hundred.

Is she spinning clockwise or counter-clockwise?